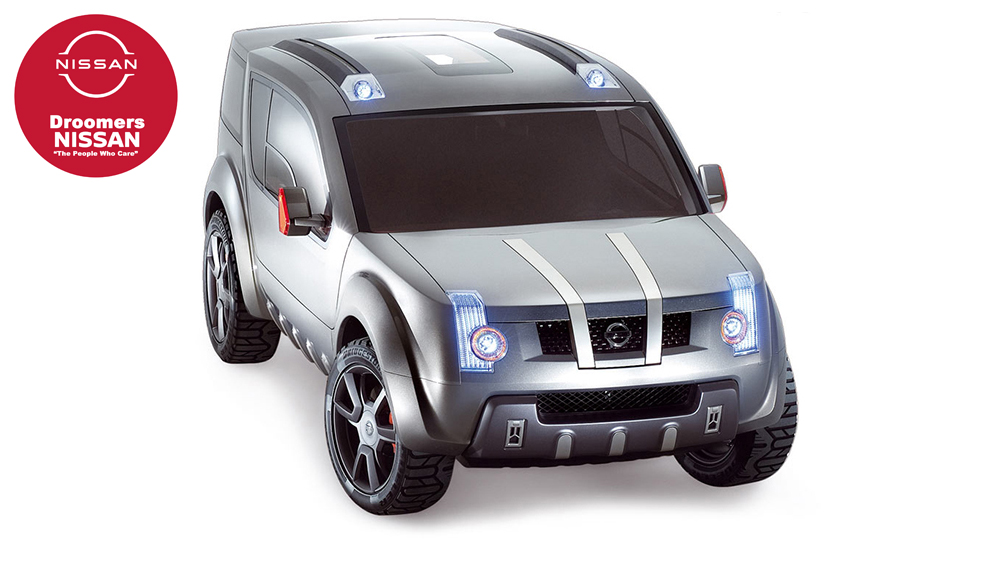 Concepts vehicles of the past - The Nissan Zaroot

Zaroot combines traditional SUV values - and a serious off-road ability - with futuristic, sporty styling that marks it out as something different. It wouldn't be the Geneva Motor Show if there weren't a show-stopper from Nissan. So, following in the footsteps of Yanya (2002), Evalia (2003) and Qashqai (2004), the star of Nissan's Geneva show stand in 2005 is called Zaroot. Like Evalia and Qashqai, Zaroot is a show car that underlines Nissan's prominence in Europe's burgeoning SUV market. It's an authentic 4x4 that delivers genuine off-road agility but with added sporty credentials in an eye-catching body that adopts and adapts many sports car styling features. The result is a dynamic take on how the compact SUV of the future could look.

Zaroot - the name plays on the words 'root' and 'route', linking Nissan's SUV heritage with the path ahead - is a traditional SUV in its ability. Nissan's advanced, electronically controlled ALL-MODE four-wheel drive system ensures grip at all times, while the generous ground clearance and short front and rear overhangs means Zaroot can more than hold its own off-road. And, thanks to years of experience in the SUV market, Nissan has ensured Zaroot is good to drive on-road, too, with strong performance, excellent road-holding and handling and high levels of comfort.

With dimensions of 4500mm x 1800mm x 1660mm (length/ width/height) it is best described as a compact SUV, yet it appears far sleeker thanks to its sloping arch roofline and the dramatic use of gullwing doors. The doors dominate Zaroot's profile, extending from the A-pillar to the rear of the passenger compartment, effectively where the C-pillar would be in a conventional vehicle. There is no B-pillar. The advantage of gullwing doors - aside from the dramatic looks - is the ease of access to the cabin they allow, both for passengers and luggage: with the rear seats folded, an awkwardly-shaped load such as a bicycle can be slotted into the vehicle with ease. The downside of such doors, however, is that they can be unusually large which can cause problems when trying to open them in tight parking spaces.

Nissan's designers have overcome this problem, however, by creating a shortened door that is only a little deeper than the side window. The trailing edge of the door finishes in line with the seat cushion, where it meets an extended sill. To maintain the ease of ingress and egress to and from the cabin, the sill automatically drops away underneath the vehicle whenever the door is opened. The side windows are fixed, but incorporate a small "toll-ticket" cut-out, while the doors themselves have no exterior handles but are opened via a discreet electric switch. Fully integrated door mirrors also house the indicator repeaters. When fully opened, the doors add just 355mm to the overall height of Zaroot, allowing access to the cabin even if Zaroot is parked in a garage with low ceilings.

If the pentagonal doors define the character of Zaroot, the "arch graphic" roof line continues a design theme that has featured on virtually all recent Nissan's design concepts. Together they bring increased sporting prowess to an area of the market which hitherto has been seen as little more than utilitarian. Front and rear styling also adds a futuristic twist to a conventional shape. Zaroot's bluff nose ensures minimum front overhangs and incorporates Nissan's now familiar double strut grille, though the unusual vertical headlamp cluster brings an almost technical feel to Zaroot's "face".

A feature already familiar to owners of Nissan SUVs is the roof-mounted spotlight package, neatly incorporated into the integral roof rails. At the rear, a wide opening tailgate eases loading, while the unusual rear lights form an extended U-shape surrounding the entire rear window. The central reversing light, meanwhile, forms part of the tailgate handle.

Inside, style once again meets function. The main aim of the interior design has been to create the maximum space for passengers and their luggage. The seats, for example, are unusually thin to underline the impression of airiness, but careful anatomic design ensures both comfort and support. Despite its wider than average cabin, Zaroot has been designed as a four seater, with the area between the seats in both the front and rear providing space for functional features such as cup holders and oddment storage. Matching the gullwing doors for dramatic style is the extended C-shaped centre console, which appears to float between the two front seats. Made from a single piece of aluminium, the console houses switches for the electronic traction systems as well as the transmission controls.

Interior materials reflect a desire to add a little emotion to the SUV's traditional functionality and combine high quality materials with an innately simple style. The result is a mixture of earthy colours - browns, black and dark grey - with unusual features, such as the 'crocodile-skin' leather seat coverings and the ribbed vinyl flooring, designed to make cleaning out Zaroot a pleasure rather than a chore.